ME AND THE NIGHT AND THE MUSIC

When I was 8, my brother and I were given a wind-up gramophone and an old case of 78’s. We didn’t know that the little dial beside the turntable set the record speed. We left it at a 100 rpm, and blithely played record after record, singing along to the cracked hysterical rendering of poignant ballads. 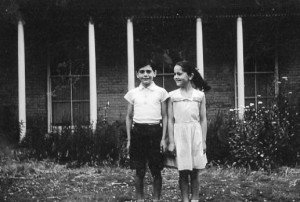 On Saturday afternoons I watched old black and white films –  close up to the television. I couldn’t see properly and curiously no-one had yet noticed. My blurry vision, and proximity to the television, made everything seem so intimate. What I couldn’t properly distinguish, was filled in by my imagination, and of course by the soundtracks. The atmosphere created by music became a fascination, and coloured everything musical that I produced thereafter. 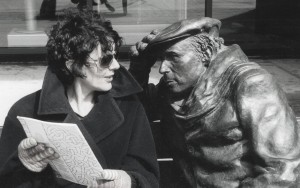 I lit candles, stuck them at either end of my piano keyboard and composed dark songs in minor keys, with sinister, repetitive bass lines. The candle wax ran into the keys and dried. I had to get a knife and scrape it away, but the bottom G was never the same.

Carol Reed’s film, The Third Man etched itself in my memory. On the inside cover of Atmospherics, you will find me walking down Alexandra Palace park entrance, North London, looking like I have just buried Harry Lime and (ignoring Holly Martins -the divine Joseph Cotten) am returning to a cruel post-war Vienna with nothing but my integrity and lost love to keep me warm. Imagination – it’s crazy……

A classical singing training whipped my singing into shape and introduced me to wonderful classical composers as well as traditional and international folk songs. Nonetheless over the years, jazz became my focus. I collected dusty sheet music from jumble sales and long-discontinued jazz albums and played and sang the songs from the American songbook. I would collapse in an extravagant heap of tears on the keyboard if a piece moved me.  Goodbye was a particular favourite. (Listen to Oscar Peterson playing it) Muffin, my dog, would come and sit by the piano and howl in a comradely sort of way. Other times I would pretend I was wearing an improbable gown and could dance like Ginger Rogers. I lived in a Victorian house with a long narrow hall, so I sashayed up and down it to Benny Goodman’s Sing, Sing, Sing. I loved the screaming horns and would turn up Gene Krupa’s drum solos and go crazy. God knows how the neighbours’ coped. 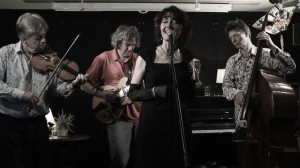 A summer rep season flouncing on audience laps singingI’ll Make a Man of You in O What a Lovely War! was followed a few years later by a national tour of an Anthony Minghella play. In this production I somehow managed at the same time to play a piano accordion, dance and sing in Italian. Somewhere in the midst of this musical life I started an all women jump jive band The Blue Stockings, and pounded the boards with my pal Reet in our jazz cabaret act that fell somewhere between Hot Club and (much) reduced Manhattan Transfer. This morphed into Pocket Cabaret, our nod to everything hip, jive and beat, which largely meant wearing long black sweaters, short black skirts and singing late-night songs Anita O’Day was on my mind. What’s Your Story Morning Glory? 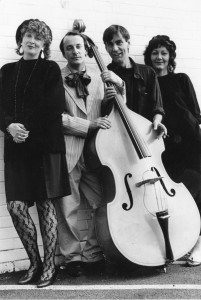 The original Pocket Cabaret circa 1988

Of the two musicians Ade and TJ, one had a bad back, and the other had had a recent vasectomy so Reet and I hauled the PA and two massive speakers from gig to gig. Late at night driving home, the police would sometimes stop me to ask about the load in the back of the car. Once I was stopped for driving over the speed limit. I had been singing Them There Eyes as I drove – a 50 mph version in a 30 zone. I explained this. The policeman didn’t book me. His shift was quiet and he was bored. He just wanted a chat. In the end he sold me a grandfather clock. These things happen…

Now my amplifier is a sophisticated, sensibly-sized AER. Reet has moved to Hereford and I am in London.  I can’t travel too fast because the North London speed humps have ruined the shock-absorbers on my car. I still have the clock but it doesn’t chime any more, and Caspar my dog now, only howls at the ice cream van….But I still write and arrange songs so they sound like they belong on some old forgotten film soundtrack and I am still singing, and on a dark night you might see a candle burning and hear music…… 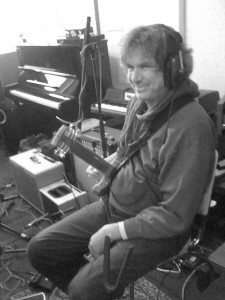 At the Cowshed – John Etheridge 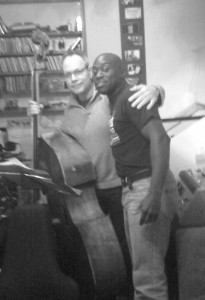 At the Cowshed -Alec Dankworth and Winston Clifford