The cool, smoky, laid back approach of say, a Julie London or a Jeri Southern with a sprinkling of Peggy Lee…where has this lady been hiding! – Lance Liddle

Kate Daniels reaches down into the wisdom at the heart of this choice selection of standards, her singing as classy and controlled as her material.” – Jazzwise 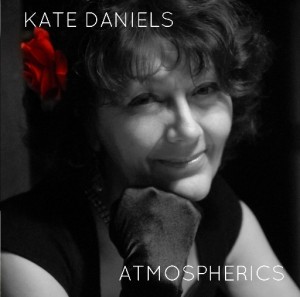 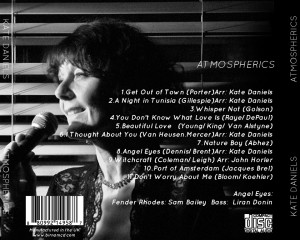 The  black and white films I watched on rainy afternoons, Pan paperbacks with sleazy covers, the haunting sounds of Miles Davis’ soundtrack to the film L’Ascenseur pour L’Echafaud and the restless music that emerged from seductive off-limits coffee bars such as The Cabana in our high street. These are the shreds of memories that I brought to this album.

The atmosphere of the 1950’s was characterized for me by films such as The Third Man and stories by writers like Alan Sillitoe. They captured the mood of a world recovering from war – of survival amidst change and loss, heartbreak and loneliness and this mood became a background for the songs and arrangements on Atmospherics. I am grateful to the wonderful musicians who helped me to realize this. and I hope you like it.